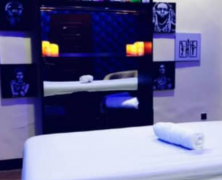 The relaxed ambiance of the newly opened Lola Spa, Kakanfo Inn and Conference Centre, is classy and inviting. Its interior glows radiantly with shades of blue. The cozy and richly furnished massage studio looks adorable and mind-arresting.

Launched a week after the Bawa Continent, an international food spot opened at Kakanfo Inn and Conference Centre, Lola Spa was conceived to meet the demands of both the middle and high-income earners.

Despite being new on the bloc, the spa is steps ahead of others around the city both in class, facilities, personnel, and the array of services.

Going down memory lane, Mr. Damola Are, Chairman, Kakanfo Inn and Conference Centre, said in an interview with Oyo Reporters that “This particular spa is a new venture. But, this is our third spa. We had the first spa named Awero Court. We converted it to guest rooms because we had demands for garden rooms. Then, we built another spa also in the garden. “We also converted that to guest rooms because people wanted the garden view rooms.  So, for a period of time, I think in the last 25 years up until last year, the second spa opened.

“We wanted to rebuild it but we had to take focus on our priorities. We decided that when we are building it, we would make it a little bit more isolated from the hotel and definitely more tastefully done. That is what we have done by rebuilding it in Kakanfo Conference Centre which opened barely a week ago.”

Asked how the name was arrived at, he said, “Lola happens to be my elder sister, so it is named after her.  She is into wellness and loves a good massage.  Basically, the spa has a massage bed, good ambient lighting, including candle lights. It comes with blue ambient colour shades which are really aesthetically appealing. It has a large  shower and a television set. Of course, we also offer manicures.  We have a manicure chair so that they can perform manicures and pedicures.

On the duration of the available services, Are said, “The session range from 30 minutes to three hours. The cost depends on the kind of service given. The spa opens Tuesday to Sunday, 10 am to 7 pm.”

According to him, clients can book through phone or email And, although the spa is open to all, he stated that “It particularly targets the elite and expatriates.

“There is a strong link between the spa, Awero Garden and the bar. People like to massage, relax and have a drink. Based on past experience, pedicures and manicure services are available to all.  Basic massages are in the same price category with the aforementioned. But, when we get into the total indulgence or anything beyond 1hour, that is within the range for the exclusive guest with discretionary income. For a quality job, you can spend an average of N10,000.”

Rita Njokede, Resident Manager, Kakanfo Inn and Conference Centre, disclosed that “The response we are getting has been positive. The ones that needed a few adjustments, we already did which is making the room a little bit darker. By this, we made it more nocturnal than it was. Those who had visited the spa really liked the service.

“Our clients should expect more. I always tell people that we’ll continue to evolve or try new things and that really works fine here.”