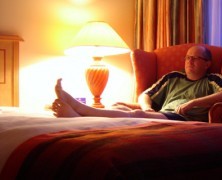 For one reason or another, you might find yourself stuck in a hotel room when you thought you’d be out exploring a new destination. It’s happened to me a few times — the weather is often the culprit, or a sudden illness. Rather than feel down about all the stuff you’re missing out on, here’s a list of the things you can do to pass the time and make it feel like it’s still a fun part of your trip.

1: RESEARCH, READ AND LEARN
Whether it’s a guidebook, brochures from the hotel or hostel lobby, or you’re online — spend your trapped time getting to know more about a destination. I’ve sometimes discovered a gem of places to visit that I probably wouldn’t have discovered without that enforced room time!
Curiously enough, some of that comes from those ubiquitous racks of tourist brochures often found in guest rooms and hotel lobbies.


2: CHAT WITH THE STAFF
Assuming you’re not stuck in your room with a contagious disease, take some time to get to know the staff at your
accommodation. They’ll most likely be locals with lots of interesting tips for you and if you find you have some interests in common they might even help you get a taste of local life.
At the very least they’re likely to tell you the real truth about the best place to eat nearby or help you figure out something else to do if your plans have been totally disrupted.


3: PLAY GAMES YOU’VE FORGOTTEN
If you’re stuck with your travelling partner or it’s a weather-induced problem and you can find fellow travellers around, then dig deep into the depths of your memory and play some games you probably haven’t played in years.
Even noughts and crosses will do if you’ve got nothing but pen and paper. I always travel with a pack of cards — you can even cross language barriers with a simple pack of cards!
Most hotels and guest rooms will have
access to a supply of board games or packs of cards at the reception, so ask and you might even get the chance to learn a new game that’s popular in the country or city you’re travelling in.

4: WRITE A LETTER
Remember how people used to write on paper with a pen and send it to each other? There’s something really special about getting a handwritten letter but
most people feel they never have time to write one, or have nothing to write about.
Now’s the perfect time to write a beautiful letter to someone you care about. And since you’re on holidays or a big trip then you’ve probably also got plenty of news to tell them. (Just don’t dwell on the “stuck in the hotel room” bit for too long!)

5: LEARN TO USE YOUR CAMERA PROPERLY
I’m sure that most of you, just like me, have numerous functions on your camera that you’ve never used — even reasonably simple “point and shoot” cameras these days have heaps of extra
functions. Take this captive time to experiment with all the functions and figure out when it might be useful to use them.
Knowing a few simple ways to use the manual settings on your camera can make the end result so much better than just using the automatic settings.

6: PLAN YOUR FUTURE
From chats with others, I have learned it’s not just me who feels inspired and motivated about life in general when I'm on a trip. Use the time to make some detailed plans about some aspect
of your future!
For example, plan out a bunch of monthly goals for the next year, write up something like a “bucket list” for the next decade or two, or simply figure out a good schedule for achieving a few important goals in the weeks after you arrive back home after your trip.

7 HEAD TO THE BAR
Try going to the hotel's bar or restaurant. Sit at the bar. Tell the bartender that you
would like to have a beer and some dinner. Bring something to look at. Don't stare at a TV (or a cellphone). Smile and nod at people. If someone else is there, eating alone, inquire about their food.
Make conversation. Relax. Sip.

8: DO … NOTHING
If your life is remotely like mine then your ability to take time for yourself and do nothing much at all may not be very well-developed. Sometimes, though, it can be really productive and relaxing (yes, at the same time!) to simply sit and do nothing.
Contemplate your navel!
There aren’t many times in life when there aren’t too many things requiring your attention but if you’re stuck in a hotel room during a trip then you don’t need to work, you don’t need to do
housework, you probably don’t even need to talk to anyone (except perhaps your travelling companion!). So enjoy it and do nothing for once!