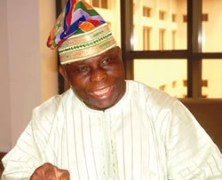 Two hundred and thirteen pupils of St. David Primary School, Kudeti, Ibadan, were issued certificates by the Lekan Are Centre for Information Communication and Technology on Thursday.

The ICT centre, which was built by the Chairman of Kakanfo Inn and Conference Centre, Dr. Lekan Are, was opened on January 28, 2014, inside the premises of St. David Cathedral, (Anglican Communion) for the benefit of youths in the church and pupils in the school. Present at Wednesday’s event were Ekarun Olubadan, Chief Biodun Kola-Daisi; a politician, Mr. Deji Aboderin, Bishop of Ibadan-South Diocese, Anglican Communion, Rev. Jacob Ajetunmobi, parents and staff of the school.

Speaking at the event, Are said the Lekan Are Foundation would continue to support children from the school with scholarship to outstanding pupils, irrespective of religion or tribe. He added that since the world had become technological-driven, it was important to expose the children to the trend so that they would be in touch with the rest of the world.

He said, “The world is now driven by technology and our children must not be left behind. We must ensure that they move with the rest of the world. I call on their parents to try as much as possible to support them so that the skills they have learnt will be developed. I also call on the pupils to develop themselves further because this is just the foundation.

“As a young boy, I worked in a block making factory to pay my school fees. If I could do that, there is nothing stopping parents from struggling to educate their children. It is unfortunate that today, we have parents who prefer to spend their money on things that are not important at the expense of the children’s education. I attended this school and what I am going to raise the standard and help the children must be complimented by parents’ efforts,” added Are.

Chairman of the Lekan Are Foundation, Adedamola Are, called on the school to maximise the opportunities associated with the centre, thanking the parents for supporting the effort since it began early this year.

“It is great when we have a gathering like this where our children are celebrated. Today is a special day in their lives and they will never forget it. The ICT centre is equipped with modern facilities and the effort will not reflect on the development of our children if it is under-utilised,” he said.

While commending Are for the centre, the proprietress, Ajoke International School, Ibadan, Abimbola Are, said she was impressed with the centre and what it has achieved in a short time.

“Beneficiaries of this gesture will forever be grateful to Dr. Are. He has demonstrated the quality of a father and a leader and I enjoin wealthy Nigerians to emulate him,” she said.


Ibadan has a tropical wet and dry climate, with a lengthy wet season and relatively constant temperatures throughout the course of the year