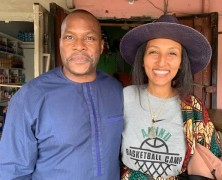 The fourth basketball clinic organised by NBA star Al-Farouq Aminu dunked off on Saturday in Ibadan, Oyo State. Aminu, who represents the Nigeria national basketball team, D’Tigers, started the clinic four years ago under a Non-Governmental Organisation platform, the Aminu Good Works Foundation, with his wife Helina as president.

Helina said the foundation was impressed because of the huge turnout of players from the western part of the country.

“We established the foundation in 2015 with the mission to provide health and educational support for underserved communities in Africa,” she stated.

“Among other things, the foundation has provided support for a local orphanage in Ibadan, including food and educational needs and we intend to do much more to lift many out of their current level.”

She said Al-Farouq had focused on his basketball camp for ages 13 to 17 and on giving opportunities to youths indulging in the sport in Ibadan, which led to the invitation to other players beyond Ibadan, the city of Al-Farouq’s grandfather, who once reigned as Olubadan of Ibadan.

Helina, who was flanked by the Chief Executive Officer of the Kakanfo Inn and Conference Centre, Adedamola Are, added, “We want to help them (youths) to build basketball skills, so that they can have the opportunity to get scholarships to travel overseas to further their education. Ideally, it is for their education. We also want to instil life skills in them. We want to help boys and girls to be the best they can be in future.”

The camp coordinator, Lekan Jinadu, told our correspondent at the Obafemi Awolowo Stadium, Ibadan, “We have players from Osun, Ogun, Oyo, Lagos and other parts of the country all represented here (Ibadan).

“We also brought some people from the north. I’m sure there are some talents that we are yet to see because the coaches are going to take them through new experiences that will sell them to the world.

“The youngest this year is about 13 or 14 years old while the oldest is about 17 years. I believe in these guys. It’s not about playing alone but about life. We are going to have conversations about what they are going to do in life; their goals, and what they will like to see.

“We are going to teach them about finance. This involves what they need to do and how hard they need to work in life to get to their next level.”