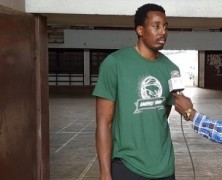 Portland Trail Blazers forward, Al-Farouq Aminu, visited Nigeria at the weekend to set up a training camp in Ibadan, which involved more than 40 children. Some of the children will be selected to take part in the African Conference, taking place in South Africa later in the year. The D’Tigers star said it was his intention to mentor the children to star in the NBA soon.

After the event, which took place on Friday and Saturday, the NBA star was led to the palace of the Olubadan of Ibadan land, Oba Saliu Adetunji, by the Chairman of Kakanfo Inn and Conference Centre, Dr. Lekan Are, on Sunday. The basketball player had in his team, his mentor, Yinka Abioye, family members as well as his agent from the US and the Chief Executive Officer of KICC, Mr. Damola Are.

Describing the day as a special one in his life, Aminu said his visit to the Olubadan was out of respect for the influential monarch. He presented a basketball to the king at the end of the visit.

Read the complete story at IBCITYNG